Oh the mysteries there are in your own home...... 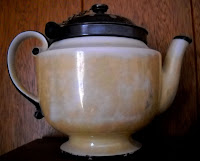 I was going to tell you that this teapot was bought at an antique store and mention how it is made so similarly to the cream pitcher that I posted much earlier.  As I examined it from of the shelf I found inside a dozen or so funny looking pennies.  I also found on the bottom that it was not a Slovia made pot but was a Royal Rochester piece made in Ohio. It is sold on ebay for 50 bucks right now. So I asked my wife, "what do you know about those pennies?" 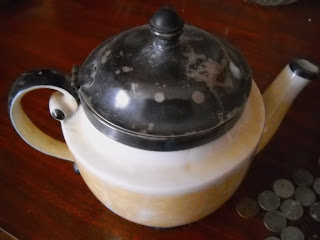 Granted we have been married almost 26 years now and I  am getting older, but I guess I do forget things.  The teapot was her mothers and when she moved in, she brought it with her, pennies inside of it.
The only reason I was even going to show it to you was to say that in a couple of scenes of "Alice in Wonderland,'"  they had a lot of teapots just so much similar to this, sitting on the long table for the Mad Hatter's tea party.  They all had the same top with a metal lid, and the shapes were so much the same. I am sure by now the March Hare has broken most of them  with his throwing of teacups wildly everywhere.        Oh by the way, did I tell you the story of what I did the other day with two  tea pots?  Never mind......I don't want to talk about it. 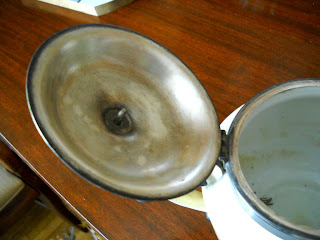 As I was exploring this newly discovered item that has been in the house for 25 years,  I see the top is actually brass or some other metal that can be cleaned to a shine.  The top finial is connected to a chain that can be raised and lowered with a tea infuser attached. When I looked it up on the internet is said the finish is Pearl Lustre. 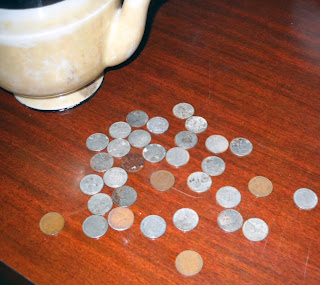 On with the story" where did these pennies come from I asked?" The pennies are mostly lead pennies that were made during W.W 2.  They are all made in the forties as we were saving copper for the war effort.  A few of the copper ones you see with them are also the wheat back and Lincoln front made in 1943 D (Denver) or 1943 (plain meaning Philadelphia). I definitely remember the stray lead penny among my coppers in my pocket while growing up as a kid, but they have all been pulled out of circulation by collectors.

The pennies were given to my wife by her dad as he thought she might take good care of them.  He also said they would be very valuable some day.  I have not checked it out.
By the way, I hesitate to recommend the Alice in Wonderland movie to all people but we loved it. We went back to see it again.  My wife and I are both creative people and my wife read the book over and over again as a child. I  knew we would like.   It really is a phenomenal showing.  If you have never seen anything in 3d, you need to go experience it with this movie. It is something that you have never experience before ever and you will never see it at home in 3d. I really can't explain the 3d things other that there are teacups flying out at you and butterflies flying into the theater and just things like that which go on all the time.

Okay Larry, you twisted my arm, I'll see if Jack will take me to see A W this weekend. ;D

I LOVED the Alice in Wonderland/3D...of course with Johnny Depp in it , who wouldn't??? ha

We have not been to a movie in ages..somehow I think I would have to go alone..but I am glad you enjoyed it! Interesting pennies..and that teapot is very different. What did you do to two teapots..were you clumsy? :)

I have never read the book or seen any of the Alice In Wonderland movies.
It just isn't my cup of tea.

Interesting pictures of the teapot and pennies. I remember the silver looking pennies of many years ago.

How interesting the story of your teapots and pennies are.
A lovely old teapot.
I have yet to go back and see the 3D version, but loved the 2D, I plan to as soon as I have an afternoon free.
More tea ?