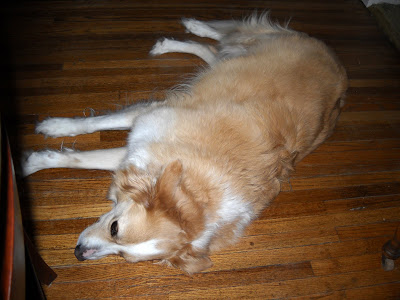 My other helper is Barnabas.  He and his older little brother are codependents all the way. They like the new dining room where I now blog and Barnie has lots of room to stretch out and be very close.  Barnie is such an active guy that he hurts his back hip.  I think walking and running and barking in the uneven frozen snow causes him to put his hip out or at least strain it.  He will not allowed outside for pleasure today as he is refusing to put weight on his back right foot. He can go out, with minimal stays, I will go with him as we have to get him back walking on all fours again.  I am concerned and hoping we don't have a permanent problem, but he has done this before spacing it out between months of being good.
A footnote......My wife now says she thinks it is his paw. He won't let me look at it but I think she is correct.  He is laying comfortably and letting it heal, just like the time he tore a chunk out of his ear. It did heal back together. 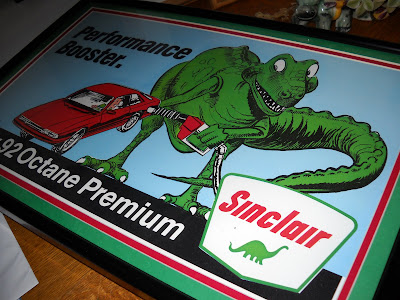 Switching subjects,  I do feel as old as a dinosaur.  I have a facebook account and I do and don't like it.  Despite some of it's bad things, an old high school friend that I was very close friends with, just contacted me yesterday.  Gosh that was a long time ago we knew each other. His father was a Methodist minister and they moved ever four or five years. I think his brother and sister all  graduated high school in 3 different schools.  He moved away our Junior year and he was a guy that was more like a brother than my own brother.

I ran into him at Iowa State for a short period in 1973.  He was one of those friends that time and place never allowed one to continue knowing each other even though we had become such good buddies.  Now with the internet, he made contact with me from Vermont.  Gosh did I say we are old.  It will be good to catch up a little on what happened the last 35 years.

The frame job above of the dinosaur filling the gas tank is one of my neighbor's collection pieces.  He collects everything that relates to the Sinclair Oil company. He had some girlie calendars that I framed that I won't show.  Do any of you remember the girlie calendars that were created for the mechanics at tractor and car dealerships? They hung them on their walls among the greasy tools and dirt filled repair areas.  I had forgotten that but for some reason the oil companies and parts companies gave them, the stores, scantily clothed woman advertisement products.  That was way before Playboy's beginning.  I suppose the man who ordered supplies would definitely stay with a certain parts company just to get his next years calendar. Our society has sure changed since then.
Another snow is on it's way but not suppose to be so threatening.  It was bright this morning but I can now see at 10:30 am that it is getting hazy.  I need to go get the mail and get to work.  Everyone take care and thanks for stopping by for my Monday's minimal blog......
Posted by L. D. at 8:37 AM

Poor Barnie. It is so hard to see a dog in pain and not understand the problem. I worry too much whenever my Lab gets sick or hurt. I start diagnosing imaginary illnesses. Must be the nurse in me.
I am on Facebook too, but I don't like it much. Seems more like a snooping party with everyone reading your stuff - lol - sort of like blogging.
I haven't seen one of those Sinclair signs in years. Sure brings back a lot of memories. I think my dad had some of those girly calendars. Him and his buddies used to ogle over some calendar and I don't think it was excitement over the days of the week.

Aawww I hope he starts to feel better soon ! He looks like a friendly, cuddly boy, and I bet he just loves hangin' with you ;)
That's a neat sign, I usually see them more often at the flea markets, but haven't been to the large Nashville one in several years, since I work Saturday's...
Stay warm !

Poor Barney, I hope he is soon back on all fours. I am on facebook also. My kids and I talk back and forth some of the time. I also got in touch with an old school friend. It was fun talking to her and catching up with each others life.

Have a nice evening and stay warm.

Barnie is a beautiful dog. Looks like he has plenty of room to stretch out while you blog. I've never been brave enough to join Facebook but I sure would love to just "see" some present day photos of old friends from 35 years ago! I remember Sinclair stations - there was one within walking distance of where I grew up. Seems like I remember they had green inflatable dinosaurs that they hung on chains in the gas station windows. Hope you don't have bad weather and I sure hope that Barnie feels better real soon. We can't help but worry when they are hurt.

Poor guy! HOpe he's feeling better and gets out for a while before the next wave of storms.

Poor Barnabas, hope he's feeling better soon. It's so hard with pets since they can't tell you what hurts.

Can't show the dirty calendar eh? Comon! It's like those old WWII nose art on the planes. We're all grown ups here.

Facebook - self censorship here. I feel too old, tho I don't feel that in most other areas of life. But my teenage children are on Facebook, and from what I've seen I don't think I can be bothered. However, making contact with an old friend is worthwhile.

I remember those calendars in the garages..they weren't even naked women..just scantily clad..you have to admit leaving something to the imagination is a good thing..especially as you age! Ha!
I hope Barnabas is going to be ok..he looks comfy all stretched out. Sometimes Ice is tough on their pads:)

Hey, I am on Facebook too! you will have to look me up!