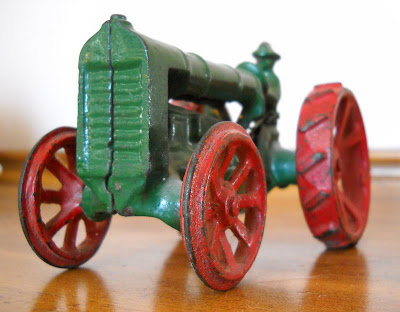 Another toy from the "John and Iva" collection

As a kid we lived on a farm south and east of a small town of Murray.  We did most of our shopping in Osceola which was the opposite direction.  The old highway 34 was hard to drive on as it had large  concrete edgings along is sides to help control water. They weren't level with the highway but stuck up four or more inches to keep the water on the road. They would have openings created for the water to drain away every once in a while.  It was built for model T.'s and the road was narrow.  New cars could get caught up on those edgings and if you hit a drainage area  with a tire you could go flying.  My dad would drive from the farm though the country to Osceola just to avoid that highway.

It was a beautiful drive on the gravel roads as we would wind up and down to get to town.  One of the areas that we drove through had a road that headed down a steep hill into a river valley and it wound around a farm area. The road then  wound back up another hill.  On the way down that road, in a field, sat one of these old iron horses. It was so unusual to me because of the metal wheels that were on it. You could see the metal cleats that were at an angle to help give it traction as it plowed fields.  I would always marvel at the tractor sitting in the weeds all rusty and isolated and think about it's past life.

When I found this toy tractor it was all rusty also and it had the little farmer wired on so it wouldn't fall away. 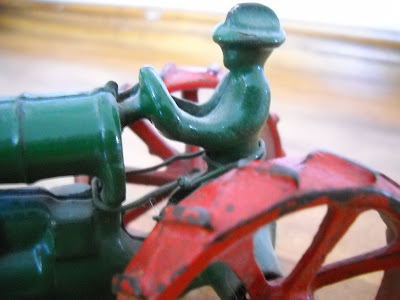 The sound that it makes on a table or the floor is amazing as it clunks along on those different cleats. I painted it as a kid and I don't regret it as I really wouldn't sell it anyway. I am sure John put the wire on that farmer to keep it attached to the tractor.

These are the gems of childhood; one toy, a trainfull of memories.

Great memories..I like your tractor!
Some of those narrow roads in Iowa with that lip were aweful..I drove a trailer for Far Guys Dad when we were in College and first married..if a trailer tire hit that lip it would make your trailer whip back and forth..I hated some of those roads..your Dad was smart to avoid them! :)

Photographing that tractor must have been difficult and you have done it so well.

This is probably a silly question, but why was it important to keep the water ON the road? Roads here are cambered to let the water drain off to the side. Interested to know the answer!

I am assuming that the roads were build on plain dirt no gravel at that time existed, so they funneled that water to their different trough areas. It made it a mess in the downpours that we have as it was like driving on a river. I guess then they thought the road bed would wash away from the sides if they allowed it to be level with the dirt base. Today, we use gravel base, deep, sometimes concrete on top of that and then blacktop on top of that. Our blacktop over here is now recycled completely, so while a machine is taking it off and away, and new batch is being made and brought in to lay a new bed.

That is a real antique an since it brings back great memories to you, it is priceless!