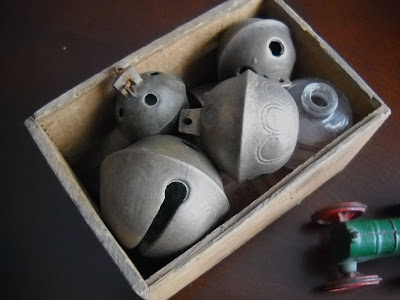 A wooden box that had come along with all the other things that I received in my John and Iva Collection. They were an older couple who lived south of us on a farm that really did remind one of the Walton's on the tv program many years ago. They gave me the toys and this box must have been in that metal toy container.  In reality they were step family as my Grandmother remarried into their family and that is how we became so close to them.  The really liked my mom as they had four boys and their grandchildren were all out of state scattered so I was a grandson to them too. 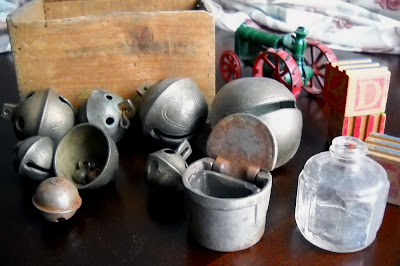 Some of these things came with the box but a lot of them were things I collected as a kid from others also, who thought they were junk.  I am going to go into detail on other blogs about the individual things and the box has a story too.  The tractor of course was a John and Iva toy that I painted.  Some of the bells were theirs also.  I will try to photograph things individually and share some of their past. I will leave you today to just look and see what you can see.
Posted by L. D. at 12:52 PM

Oh what fun, I love looking at all your treasures.
Sunny :)

Very interesting collection there Larry. I look forward to more photos and history.

looks like some ink wells to me. the bells are unusual to me.

Those bells must have come off a horse's sleigh? They look great! We went to an auction yesterday that was great fun. I got some blue and white Currier and Ives dishes which I collect so I was very happy...then we spent the rest of the day going around to antique shops with some company we had over...we all had a great time!

It must've been fun finding all these treasures. I love the bells, they look really big.

Those Victorian Sleigh Bells are awesome. Polished up they will be a great addition to your Christmas tree. They could be numbered..for their size..they are just fantastic!! You probably have other treasures in that photo also..I like wooden boxes ..but those bells are special:)

I love the words, but once again I am even more stuck by the patterns and symmetry of the images.