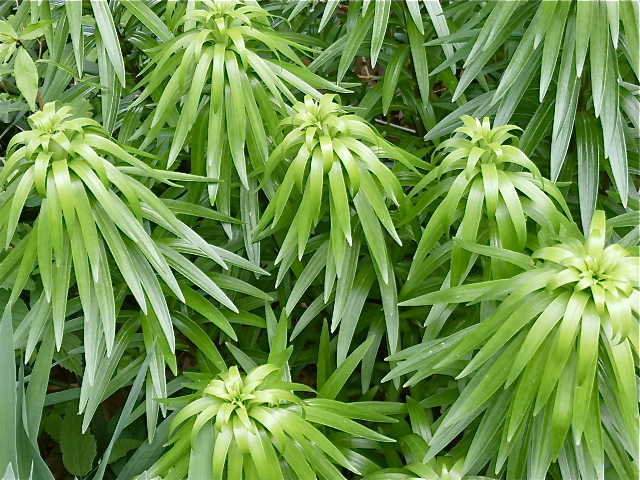 As a couple of sets of people that I know are off on cruises or Disneyland I find that I can go our and look at my palm trees in the garden. These lilies put out such small number of blooms last year so this year the plants will be making up the difference. 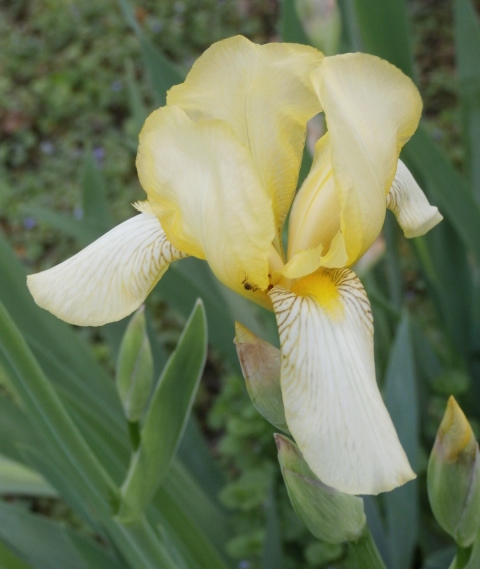 I like collecting these old iris.  I just spotted a couple of ones that I don't have in my collection and will be borrowing a start from those two.

I have a first cousin and her daughter now living the life a crime by taking starts of cemetery iris to put in their garden. I made up a program or a cause the I call "Saving the Species." 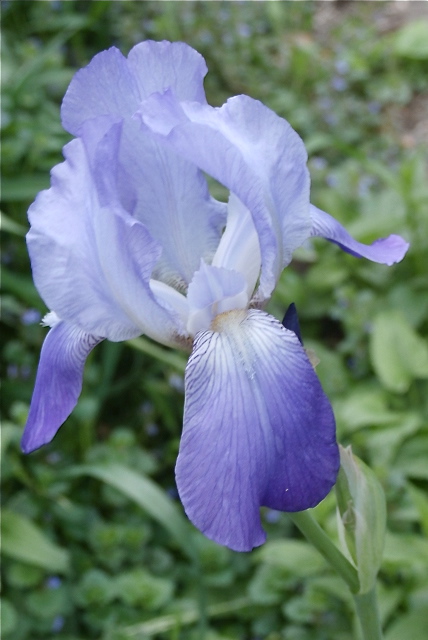 This is another of the old fashioned iris.  I guess I need to pick one of each size of the iris and photograph them.  The medium sized iris is larger than this and the hybrids of course are very large compared to this. 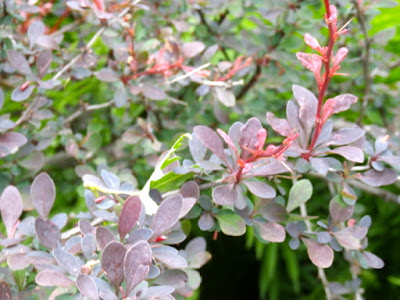 The barberry puts our such great color in spring.  I have a yellow green one that I need to share some time too. 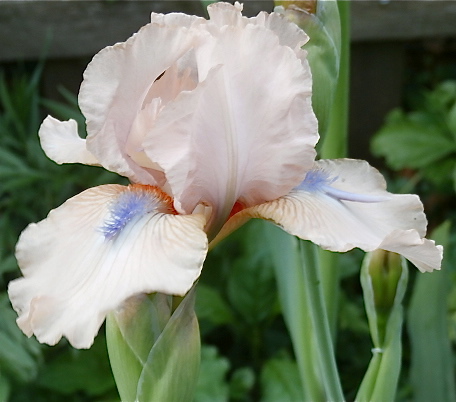 I bought this iris a couple of years ago and it did bloom for the first time last year.  This year it has spread and it is going to put on a great show of flowers. Having the blue against the gray pink falls is a striking color.  When I first saw it bloom last year I didn't think I liked it but now that it has upright stems and nice bright color, I do know that I like it. 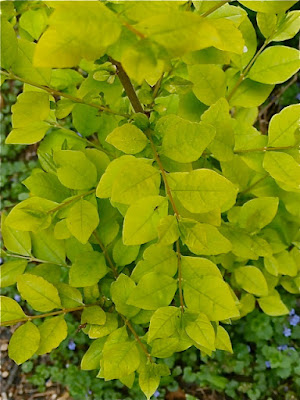 I have a couple of these golden privets and I just can't get them to grow.  They get about a foot high and then die back.  I sprouts out great foliage the next year but I really wonder why I keep trying to grow them.

We have had a trying time the past three days and Barney's back left leg was injured or the hip just went bad.  When he has a leg that hurts he just won't put weight on it.  I have lost track of the scenarios we have been through but 24 hours after he had gone down, he got up wobbled around, and let me walk him.  We didn't think he was ever going to walk again.  After our one adventure out to take care of everything he came back in and down he stayed  for another 12 hours. I returned home after school yesterday and tried to get him up. He proceeded to bite me on the hand, no blood, and then got up and walked.  He took me out and walked up and down the street.  Then he spent last night down again.

This morning we could hear him moving around on his own, downstairs, as he move from one room to another.  So I walked him before breakfast and he took me where he wanted to go with the leash. I think now he is going to stay walking to the good now. He can slip himself up freely without hesitation and spontaneously.  During all of this I decided we need to give him asprin.  One tablet in morning and one at night.  I do think it helped.  What the future brings with Barney I don't know but I think we are going back to normal again. I guess we need to look for a harness device as  Barney's friend in Minnesota has. I could have maybe picked him up like a suitcase then. He has done this before but not to this much extreme. 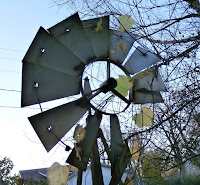 I am the special education teacher today but I have been yanked from there to cover a shop teacher for one  period.  I really hope that I don't get stuck being out here all day.  Time will tell. I am glad the weekend is coming. It will be raining a lot but I will be glad for the days off. I hope everyone is doing well.  Thanks for stopping by today.

Gorgeous Irises they make me smile to see them emerge each year :)
Poor Barney, I hope he gets better and stays that way. Most animals will walk on three legs with any amount of discomfort, so hoping it's a little bit of arthritis maybe ?
Have yourself a wonderful weekend Larry !
~Jo

You certainly have a wonderfully beautiful yard of iris blooms, Larry, and this is one of my favorite spring blooms. Sorry to read about Barney's problems.

Some really nice Iris there!

That pale pink Iris with the Purple fuzz is really different!
Poor old Barney, yes we use the harness with Chance from time to time, it really helps, right now we are giving him one Ecotrin a day (A coated aspirin) so far it seems to be working. It is really hard to watch them get old. Chance is walking more so he is moving better...mostly:)

As you can tell, I am reading your posts backward....I am so sorry Barney had such a tough time. It is heartbreaking when they are not themselves. Hoping that the improvements I read about more recently are still occurring.