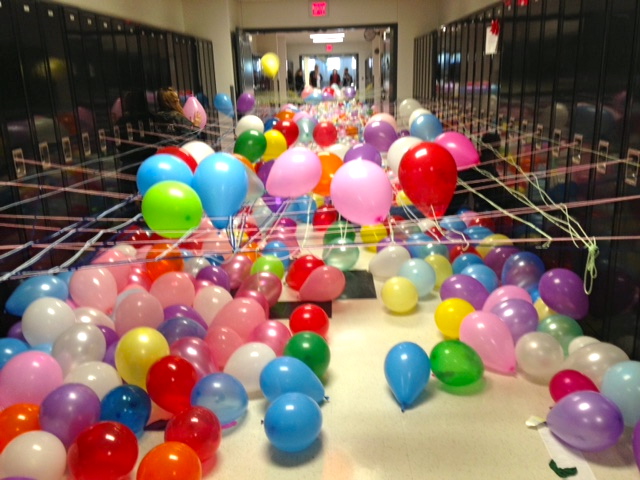 Senior pranking is a new thing at the high school.  At first a few years ago a prank was done to sort of get back to the school by moving things into hallway and hiding computer screen into the hanging ceiling. It really was more mean than in good fun.  In order to manage the potential bad thing the principal secretly gets involved.  Behind the scenes the principal approves what they plan on doing and lets them into the building to do it rather than have them break the law by illegally enter the building.  No targeting of specific teachers is allowed. 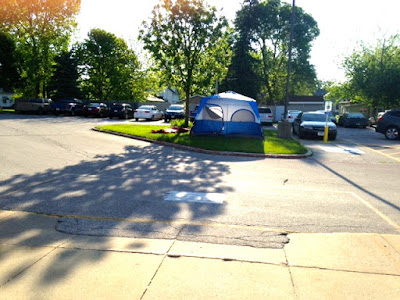 When I arrived at school on Friday, the seniors had parked their cars and a tractor at diagonals so no one could park their cars. (I do wished I had rich parents to buy me those big trucks that they are driving). They also pitched tents on the lawn and spent the night in front of the school.

The above photo shows the one hallway in which they strung yarn back and forth. The process created a net that students had to crawl under to get to the four classrooms. Balloons were placed below and on the net. One of the strings was tied to the door that I had to enter that was just around the corner. I untied it and opened the door.

The hallway was cleared by second hour and the tents disappeared throughout the day.  They were having to take them down in the rain. They day was not really effected by any of this pranking and no damage was done.  I find it strange that pranking really didn't happen up until about six years ago.
This senior group don't work seem too full of energy and I heard a principal say, "is this one hallway all you want to do?" 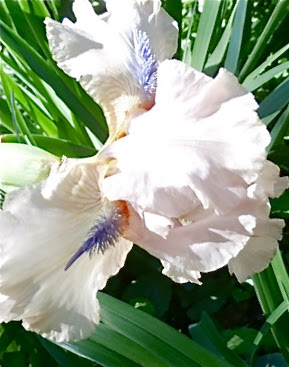 The heavy rains and the very strong winds is causing some of my iris to be knocked down.  Some stalks were standing up again by evening but some will have to be staked up today. 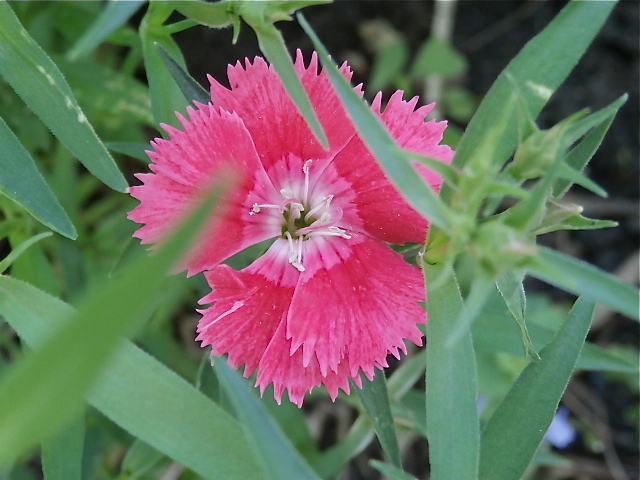 I moved dianthus plants from a planter to the garden last fall and this is what I have.  I did use to have dianthus winter over in the past and this plant had done just that. It is loaded with buds so you will see more photos of these mini carnations. 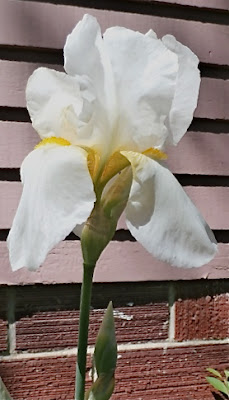 Barney is so much better.  I think his back legs are always going to be fragile considering his 11 years of age. The widening of the one step by 4 inches made a load of difference for his ability to climb the backyard stairs.  The step is wide enough for him to stop and rest on now if he wants to.  He really is going up and down the steps better as they really are more proportioned to his length of his body.  When he was strong he could just hop up the three steps.  Now he can breeze up them in a slower motion without any special movements.

We were cold last night and it looks like we will have the sunshine warming us up today. It will be nice to move back into normal temperatures. I wish you all to have a good day today.  Thanks for checking in today.
Posted by L. D. at 6:46 AM

Your flowers are pretty.

Still cold but warming up for you, summer weather is moving in for us.

Have a great week Larry ~ FlowerLady

I love that the principal is in on it all, and that balloon hallway is perfect! I think it is a great way to have some good old fashioned FUN! :)

Happy to hear about Barney.
Speaking of senior pranks....I graduated early (Feb) from high school, along with a friend, Sheila. I guess the local police thought there would be a bunch of hoodlums getting out that day and they were prepared! Turns out, it was ONLY me because Sheila rode with me!!! The Police looked a little disappointed! lol By the way, I drove a 1974 Caprice Chevrolet 2 door - if you remember the door was as big as most cars today! ha