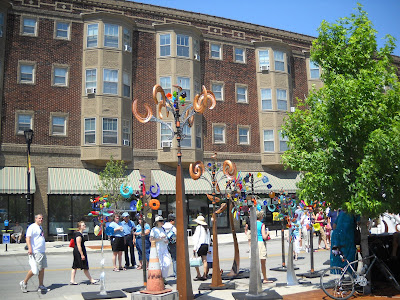 Each year there is a large art festival where  artist from around the nation come to sell their work.  It started at 10 in the morning on the streets of downtown and there are about 180 exhibitors. I won't go into great detail but did I say it was hot?  We had wind and storms the night before and the high today was around 94 degrees with heavy, very heavy humidity.  We attended as early as possible because we knew it was going to be unbearable. Everyone else did the early attendance thing so it was hard to  walk anywhere.  Downtown streets are hot normally but with the clear sky and warm weather it was exhausting.  We enjoyed seeing it all and I will share more later. 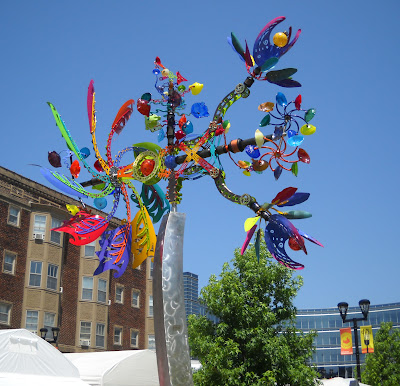 One of my favorite exhibitors is the guy who builds these things.  It is a wind powered sculpture with all parts turning.  The price tag in in the thousands so I don't bother to buy bulk in them.  He has gears and ball bearing parts that makes everything move with such ease. 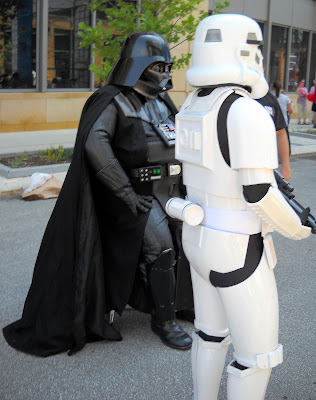 Did I mention the heat?  It was so hot that  Darth Vader had to sit down in order to survive.  There were six of these guys roaming the streets to advertise the  oncoming Star Wars concert coming to Des Moines.  Darth does his breathing thing anyway, with a microphone, and he was really out of wind in this  hot outfit.  I will show other pictures of him later with his fans. I have some really fun shots of people behaving naturally.  Me, I was just chasing them all down the street and taking shots as fast as I could, that is normal isn't it? 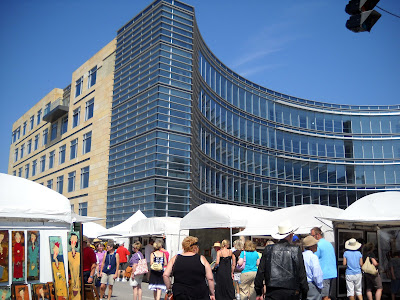 In the middle of this festival area is a giant grass green park full of donated Papa John's 45 million dollars of sculptures. I will show that later, but the downtown of Des Moines is trying to perk up a lot. 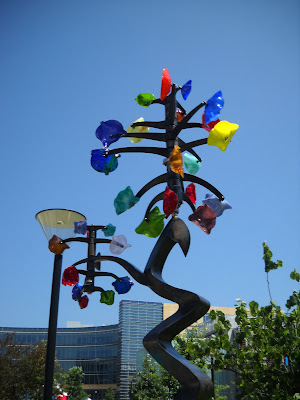 I will close with a view of the other half of that building and a whirlygig in front of it.  The show had paintings of all kinds such as photography, pottery, sculptures, jewelry,  and furniture.

We went to the Spagetti Works for lunch and then traveled to another alternative art show at the State Fair grounds. It was inside and air conditioned.  My wife met a fellow art blogger and her husband there who were selling work and we saw neighbors and old teacher friends. That is another blog.  Thanks for stopping in for a visit............
Posted by L. D. at 5:13 PM

Love the sculptures against the blue sky and that building as a backdrop. I think we are all suffering from extreme heat this weekend. I look forward to reading more about your day in future blogs.

Looks so interesting..I would've loved going there (except for the heat, of course!)

The whirlygig sculptures are really cool and it looks like a fun time.
It's very humid here, makes it hard to breath!
☼ Sunny

The weather looks as wonderful over your way as it is over here. It looks like a great festival - thanks for sharing it with us.

The heat looks relentless - it's a wonder the exhibits didn't melt.

This looks like fun except for the heat..but you people from Iowa love the heat! The sculptures were very interesting! :)