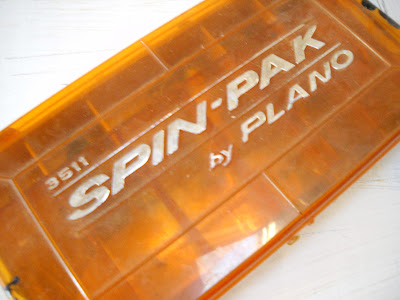 I am throwing junk right and left out of my dad's garage.  He died in 2000 and my brother who was living there continued to fill the garage with his construction stuff.  When my brother died in 2008 he left me with a mess.  I have given a lot of things away.  I have invited people to come in and help themselves, I didn't even want to know what they took,  just keep the material moving out of the garage.  Last Monday I was feeling a little down and overwhelmed when I stumbled onto this high on a shelf in a cupboard. 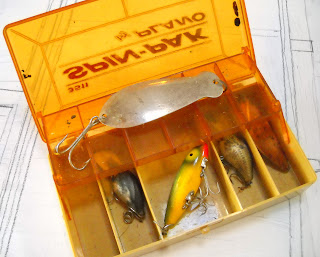 My dad loved to fish and he had a large set of tackle that he let my two sons have when he realized he wasn't able to go fishing in Minnesota anymore.  He could go to a few ponds around Osceola, but for the most part all his fishing buddies had died and he really had no one around free to go with him.  His health really shut him down his last few years. When he did take off to the city pond, he had a reserve box of lures, and I found it.

He wasn't hiding it as much as my brother just stuffed it away so he could get more things of his into the cupboard. I reached up being able to not see what I had reached for and there it was. 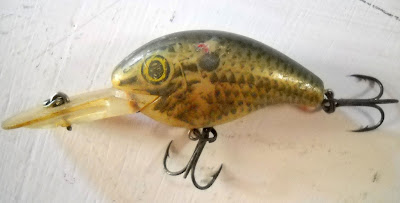 Thanks Dad for giving me a few tears and a lot of smiles. These were his favorites.  All of his favorites except for a dare devil that he used all the time in Minnesota.

Must have been a tough clean up session. I can imagine! I keep cleaning and purging so my kids don't have to.

This was a gift to you. A wonderful gift.

What an emotional find for you. Those lures really brought up a lot of memories for you. Maybe you would want to create a shadow box with these along with a few pics of your dad in his happy fishing days. I often find things tucked away that belonged to my parents. It's a mixture of joy and sadness when that occurs. How ironic that you found these just before Father's Day. God bless.

That was suppose to happen. And....just want you to know those things are highly collectable.

What a treasure you have found, not only with the lures but with the knowledge that they were your Dad's favorites:)

I am SO glad you didn't give these nostalgic beauties away...I love to fish too...and these were his FAVORITES>
Thank goodness you found them before someone else did.