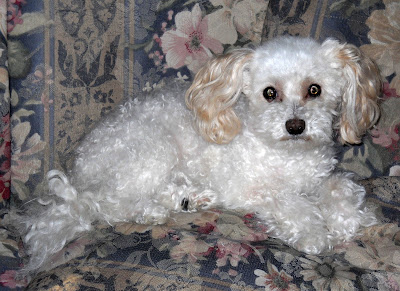 Photo taken a few days ago before going to the doc.
Button came home on Thursday from his surgery.  They removed the growth from inside his mouth and a wart off of his eyelid.  To add to the irritation he had a wart removed off of his knee too. Needless to say he was a zombie when we brought him home and he slept most of the time since.
We are a nervous mess as we  have to keep him from rubbing his eye and keep him from licking his knee.  This am he has eaten for the first time in a long time, despite the soreness inside his mouth and he drank water.  We will take turns monitoring him all day but after that he will be probably be doing well. We swabbed vanilla around his knee stitches as to give him a bad taste to discourage the licking.
He is up and active this morning and acting much better, but his pain pill is going to relax him for the morning.
While we were in the waiting room to pick Button up to bring him home, a woman walked in carrying a young goat.  She sat down in a chair next to a large diefenbachia plant and the goat was proceeding to take a bite out of it.  I got up and gave her my chair and area so he could be removed from eating a poison plant. He had his one front leg wrapped up and it had been broken.  It was one of the goats that has light gray ears and a brown head. The woman was stout to carry that guy around and to be sitting in a chair holding it.
Thanks to all of you who have been concerned about our 12 year old little guy.  He seems to be a tough survivor and we hope to keep him around a few more years.
Thanks for stopping in.....
Posted by L. D. at 6:29 AM

Get well soon wishes to Button. The goat story is wonderful.

I'm so happy to hear about Button, I hope he makes a speedy recovery.
My son is here for a few more days so I'm really behind reading my favorite blogs. I'll catch up soon.
Have a lovely weekend and Lucy sends Button a big but gentle doggie hug!
☼ Sunny

Thanks for the update on Button. I know the fact that he is eating, drinking, and active this morning makes you both feel so much better. I hope Button makes a full recovery and I know the Vet and you two are doing everything possible for him. He is so sweet!

Oh, the poor dear! So sorry! Good to know that vets can perform many miracles and keep our companions healthier longer. Good and speedy recovery to him and to you too.

Awwwwww.
I can see why you adore him.

i'm glad he's doing good - we worry when they become vunerable or sick. I'm sure he'll be up in no time.

Awwww I hope he has a speedy recovery from his surgery, poor little chap...
You may have to feed him some of the gourmet cans of food (Little Ceasar's) at least until he can eat the more solid kind, it's kinder on the gums.
He's a lovely boy !