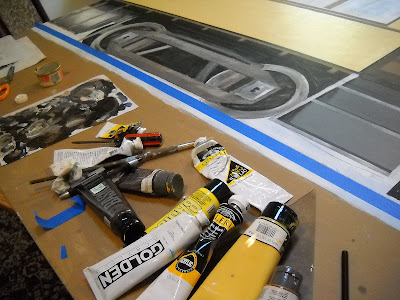 The frustrating thing about the trolley mural project is not having a clear concise picture for a reference.  I was using my toy train set for awhile and the wheels on that were not proportioned correctly.  I worked on them today and I am getting closer to liking what I have done.  We have a mid July deadline so we will be working more regularly on this. 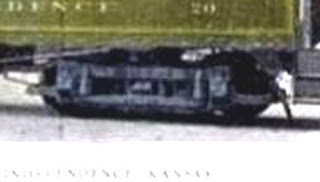 This is my fuzzy reference that seems to be working.   I am not a train fanatic so I don't know exactly the engineering of these things.  I can't fake it, so I will give the best impression of what I see. 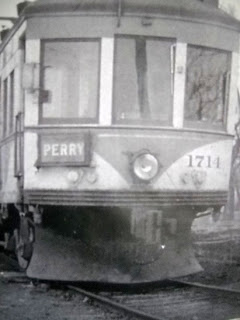 A side story that I recently heard from the town policeman.  He said that their are trolleys that were used for the base of houses in the town of Perry.  Just like when they take a mobile home and build around them, apparently they had cars that people built around.  A week ago, he said that a house burned down in Perry and it had a trolley in the middle of it.

The frother guess was probably the best guess so far.  I should have laid the spoon down with it to give you a frame of reference.  The wire it is made up of is all rusty and I am not sure it was good wire when it was first made.  I can't imagine even using the tool in beating up batter or eggs.  I suppose the wire could have had a coat of paint on it too when it was new.

This is a fascinating project, Larry. You're endlessly inventive!

It's always a pleasure stopping by Larry, no need for thanks. And it is always fascinating keeping up to date with your various projects.

How about a pillow beater..they whacked those too in the spring when they cleaned house? I cannot imagine using it with food..interesting Larry.
I suppose they had to do something with the trolley cars..I have never thought about it..it makes sense now..thanks for sharing! Up here in the sticks sometimes they build around mobile homes so much that they are no longer recognizable as such:)

Very interesting about the trolley cars. My dad was with the Metropolitan Atlanta Rapid Transit Authority for 44 years. When he started work there after returning from WWI, he worked on trolleys. I have very few memories of ever actually seeing the trolleys though. Can't wait to see the work you two are doing.