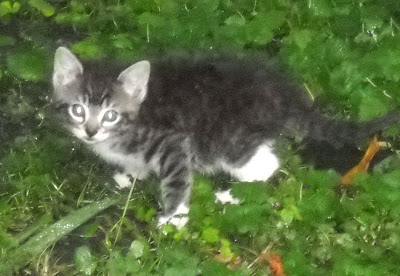 The kittens are growing and I was able to pick up the black and white one today. I carried it ten feet to the food dish. The three of them are getting to the age that they can crawl up into my red garden bench and play fight with each other.  One tamed kitten is getting me a little closer to getting them ready to return to their owner.  My wife says they will come back even if we take them away. 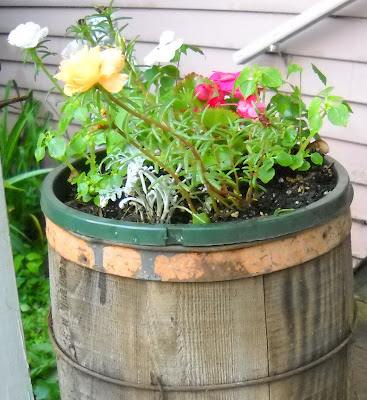 I finally planted the plastic liner that fits into my nail keg.  They are all doing well but it will be a couple of weeks before it fills in and looks good.  I really like moss rose and they are doing so well in this grouping. I have a macro of one of the moss roses and it will be a photo a day post someday soon. 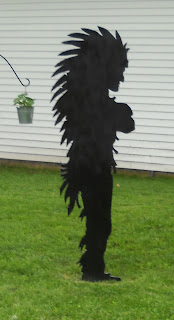 I posted a photo the other day with the black shadows of wolves on display in my neighbor's yard.  She ordered this pattern and now has an eight foot Native American standing behind them.  I took her to buy the wood and she proceeded to cut it out with her saber saw.  I mentioned before that she is mostly Lakota Indian of the Sioux Tribe of South Dakota. I teased her about getting her teepee put up and she said she had plans for one in the back yard.  She is so proud of her heritage and also her craftsmanship. 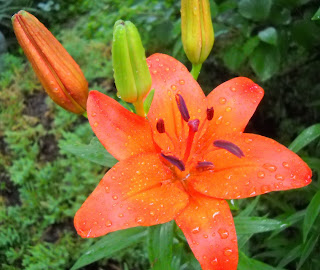 The lilies are here.  If you followed me for a year you know that it will get almost boring with all the photos I take of them.  I have some that will bloom late so I can go over a month with new photos everyday.  I wished irises lasted longer but this is a nice transition for me.  My monardia, bee balm, is budded and ready to go also.

I had planned to go across the street and take a picture of all the hay bales that had been created that last couple of days.  Apparently while I was in Osceola on Monday, the farmer came in a carried them all to the end of the field.  I looked out and was ready to go over and all I could see is a vacant green field.  He moved them before the rains started.  Maybe when he does the next cutting of the hay I can get him baling and also pictures of the large bales.

Those moss roses will look great in the nail keg..I like them they are no fuss plants. That kitty is really cute..they may have adopted you already!! :)

Hello Larry, Those kittens are so sweet. Your plants are so pretty. I love the vibrant color of your lily. I had someone to ask if I know what the flowers are in my post tonight about Monterey - do you happen to know? They almost look like a moss rose. I have some bright red bee balm that the hummingbirds love. The bee balm has the cleanest fragrance too. Your neighbor is very talented and she's lucky to have you as a neighbor to help her with the wood.

What a great mixture today Larry - like a well selected and perfectly tended bunch of flowers.

I love those lilies...ours are just throwing up shoots now so our flowers will come in about two weeks.

Yes please to photos of the hayfield! You know I love to see all things to do with farming.

Your nail keg looks a wee bit like a whisky barrel..

I love the planter in the nail keg. We have a wine barrel that I'm trying to figure out what to do with, and I think your idea could work. Just need my husband to cut off the top.
I enjoy seeing your lilies. The lilies here may not get a chance to bloom, they flower stalks are so moldy from the rain they are bending over.