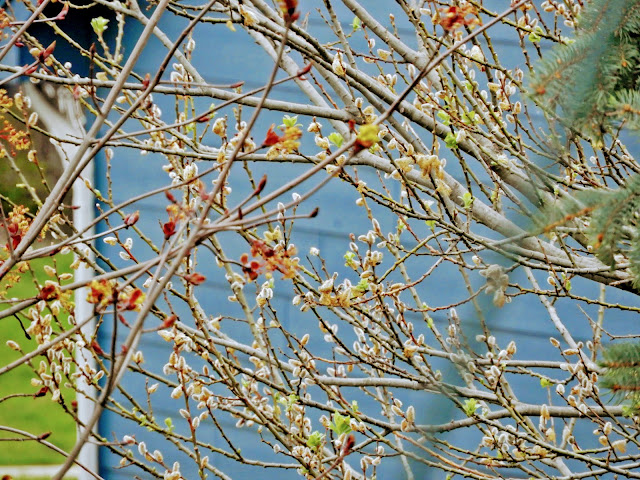 A zoomed photo shows the maturity of the pussy willow tree buds.  It shows the leafing out of the red maple tree to the left of it.  Also the blue spruce has a blurred part of the picture on the right side. 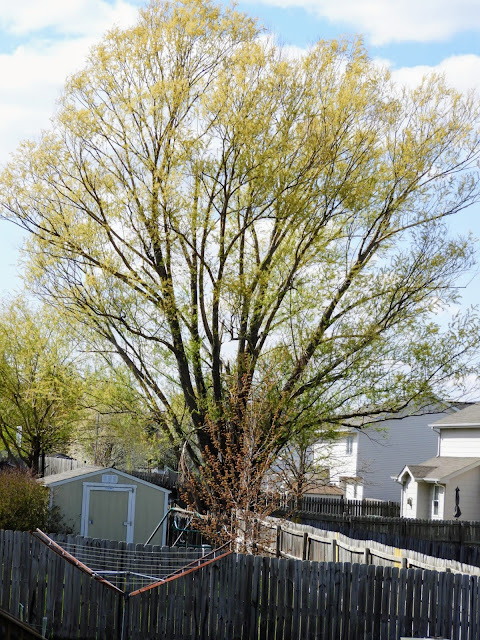 The neighbor's big tree that is two lots down is putting out its leaves. The are not all ao they are a faint amount of color compared to the fully leafed out tree. I have decide that the tree belongs to the neighbor to the right of that fence line. I that the fences butt up against it but there is not fencing on either side of the tree.  It just blocks the whole between the properties. 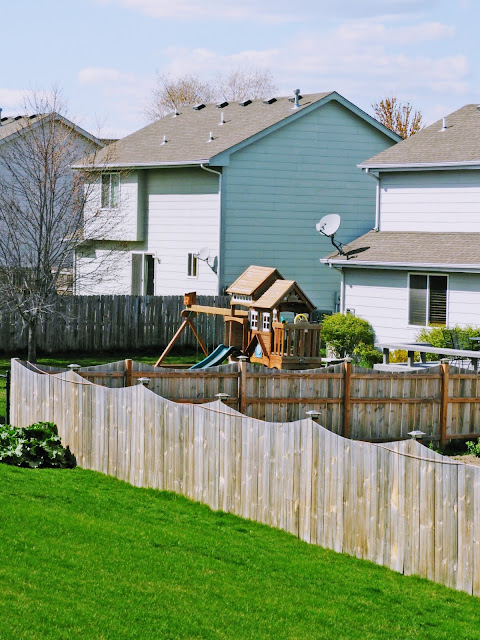 This doesn't appear to be an unusual view of the yards. The thing that surprised us is that playground unit did just sit in the other backyard a day ago. It set in the backyard of the one  just north of it.  The new owner of it has grand kids that come and visit on weekends so I am sure that that it why it made a move.  It looked so strange to see it there after seeing it in the other yard in the for four years we have been here.  I really would have liked to see how they moved it.  I suppose they could have taken out a section of fence between the yards and drug it through.  The two dogs that live in the yard don't seem to pleased to have it in there yard as they now have to run around it when the chase one another. The grand kids are sure going to be happy to see it there.

The creeping phlox is looking better. The cold weather has slowed down the opening of the flowers. 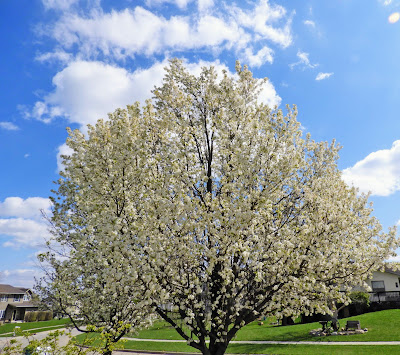 I seem to be moving slow today. I am late blogging and yet I don't have a heavy schedule.  I do think I will dig out a cart and carry a bag of dirt over to the raised bed tomato spot.  I didn't get things plowed with a spade and I won't now but a new layer of dirt won't hurt.  I can maybe use a potato fork and work it in a little as the days go by.  We are still too cold for me to put out my tomatoes but I need to get them in the ground soon. When my neighbors to the north plant theirs then I will also plant mine.

I am moving slow, too. Everything I do seems to take twice as long. I am half planning to get big pots and have a tomato that way. I am thankful I didn't get it done yet as we had snow night before last as well as frost last night.

You've got leaves coming out!

You always share pretty photos, it is nice to see things greening up there, that is comical about the swing set!
I hope you both are doing well.

Those blooms in your areas are really spring like Larry. Thanks for stopping by my blog and commenting, much appreciated. I seem fo fall woefully behind in blog visits and do not blog more than 2-3 times a week, often less. Lately, my blogs have taken a bit longer to prepare as I am reading and learning about things around here since any long trips are out of the question for now, sadly. And, yes we all have those feeling tired days.

Leaves coming and green grass you are so far ahead of us!