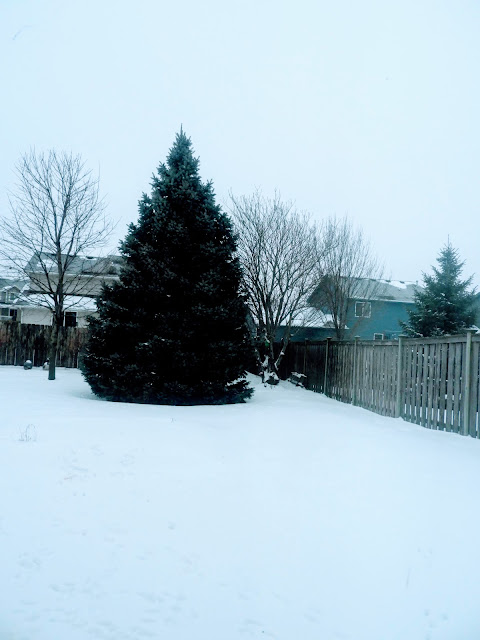 What we see everyday this winter.  Nothing much has changed and we do get a light snow once in a while to level off all of the rabbit tracks or squirrel tracks. The snow is heavy enough that you can not see the raised garden bed where I grow tomatoes. 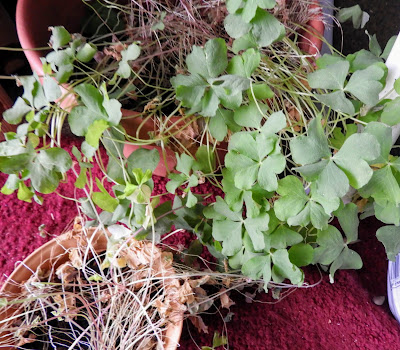 The two pxp;;os [;amtes are ;
liking the bright light from the sliding glass door. The smaller plant got over watered so it is trying to comeback from such abuse.It is probably time to replant them both into fresher soil. 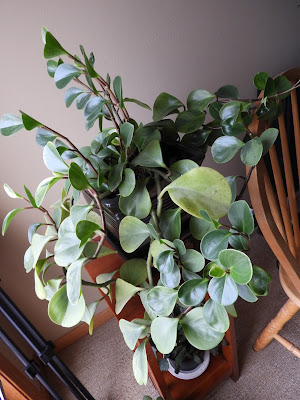 Back in the sixties and early seventies, this plant was placed in terrariums as it was considered one that could take being placed in a confined growing condition.  Peperomia was sold a few years ago and I have the proof that it can grow quite large.  I have cut it back once in a while. It turns yellow when the person in the house doesn't water it often enough. I do have a few old glass containers that were used as terrariums but I haven't tried it yet. It really likes the window in the living room in which it sits.

It is Monday and things seem busy around the house. I did go to Ace Hardware today and bought the wrong filter. It is less that a mile up our hill so I can return it quickly.  It just bothers me that I couldn't find the correct size of filter.  I did not have to shovel snow for the last two days.  It is warmer today with the temps hanging around freezing.  If the sun comes out a little of it does thaw.  Thanks for stopping in today. Have a good rest of the day.

I just looked at a peperomia plant on line to see if I was spelling it correctly.  I see that they are selling starts of the plant for seventeen dollars. I bought my start for four dollars at Wally you know where.

The snow scene looks so serene, especially with the tiny animal prints.
I used to have a couple of those indoor plants you show, sadly nothing grows well unless it is outside in this house.
Stay warm Larry !
~Jo

No snow to shovel here either...it is a nice rest! You have a green thumb...I saw some beautiful African Violets in the grocery store today and thought of you!

Currently snowing here in Wellman... Bu it looks pretty light. Hopefully not enough to have to shovel anything or worry about traveling. Temps never climbed above 24 degrees all day today. Maybe warmer tomorrow.