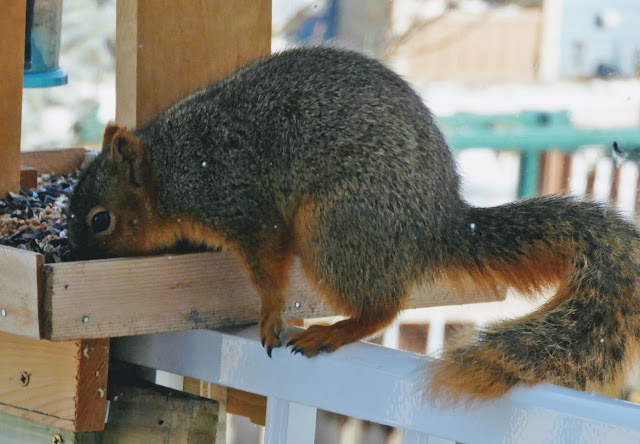 The railing is tricky but he did finally figure it out. You can see the two slanting sides form the top of the rail.  It did keep him from eating there but today he finally got very brave and jumped up near the feeder;s  edge.  I expect that he fell a couple of times when trying.  If he fell then he had to land on his feet from a two story height. He has made a couple of trips now that he figured out how to get up there. 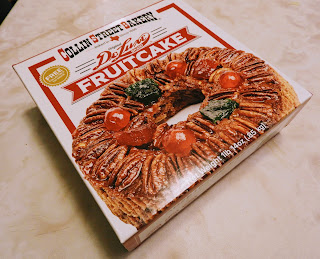 On my way to the old place I stopped at a smaller grocery store in Polk City, Iowa.  I wanted to pick up a pie or cheesecake for our neighbor lady to give to her at the old place.  She has not been feeling well and I needed to make a visit.  When I walked into the grocery store I found these rigtht inside the door.  It looked like they had just unloaded a new case of them.  If your are not familiar with what I bought it is a famous fruitcake company from Texas that sells all over the world. 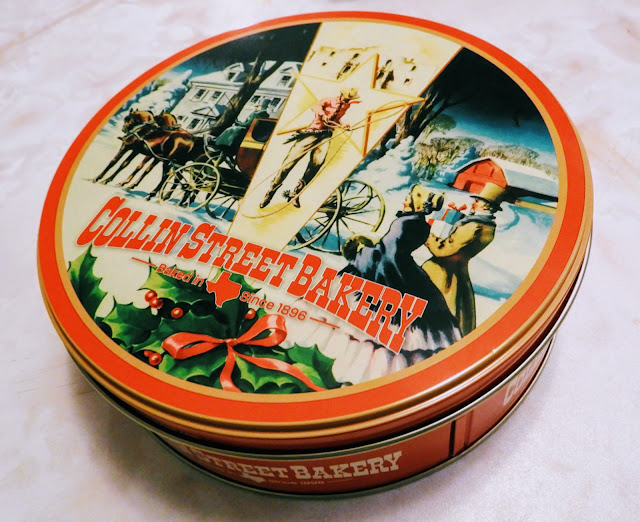 When I was a lot younger than I am now, I supported a missionary woman from Texas.  She had a sister that sent me this brand of fruitcake every Christmas to thank me for my support.  My wife use to make me fruitcakes but it did seem to be our busiest time of the year so she quit doing it.  My first cake I tasted was my Grandmother Brooks' who baked her in coffee cans. It was her tradition to save the bigger coffee cans and also the smaller cans. She made three or four of them,  My mom made them very seldom.  So yesterday I was treated to an ability to buy this.. 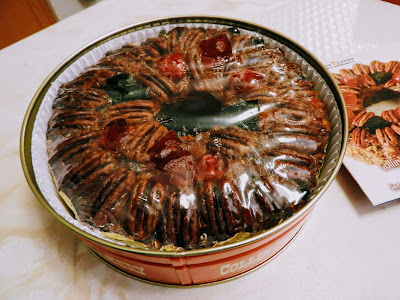 The Collins Street Bakery sells on the net. They have a variety of different things now for sail other than fruitcake.  I see they have pecan pies.

We had our first taste test of it and I am certain they had baked it a few months ago.  There isn't rum on them to make them moist.  But this still tasted good with it loaded with dried fruits and so  many pecans.  I did tell my wife that here fruitcakes were sure a lot more moist. The double row of pecans on top make them labor intensive and they are not inexpensive. Mine was nine dollars less than the internet price and that was good for me.

I can take a break from the snow blower for a while.  We have stuff threatening on Wednesday and severe cold temperatures coming next week. Weather in the mid-west is always consistently inconsistent. We just take what we get as each new day comes.  I took down the last Christmas Tree today and I have a smidgen of Village pieces to put away.  Thanks for stopping by today.

I'm amazed at how the squirrels learn to access the birdfeeders.

Interesting about the fruitcake....that is a great tin! Yes snow is here again and a storm is supposed to come for the weekend. :)

I have had some delicious fruitcakes over the years, but not on a regular basis. A friend of ours told us about one she ordered from a monastery but now I have forgotten the name. It is also quite famous. Hope that more snow doesn't come your way, Larry, but the snowblower does make it easier than hand shoveling.