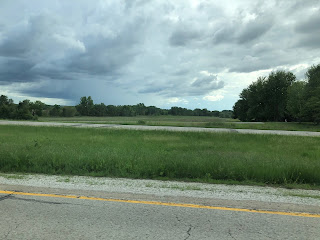 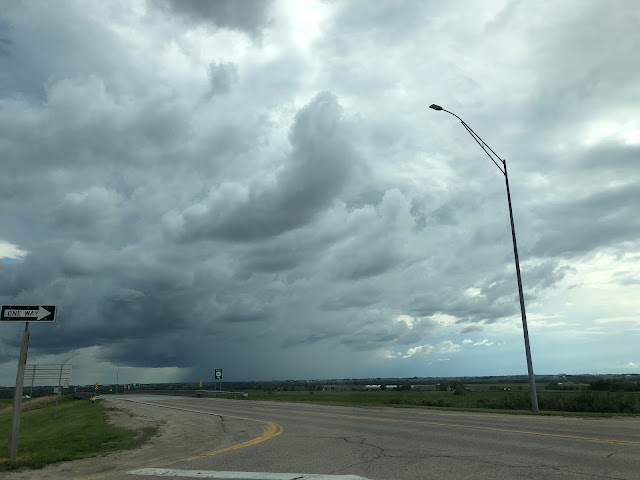 I have been scheduled full for many days so as I haven't been able to mow at the old place. This afternoon I took off for Woodward and I could  seerain downpours scattered all along the way.  This one here eventually made it to where I was mowing.  I mowed in heavy sprinkles for the last twenty minutes and then I just quit as I was getting too wet..

This evening, we were in a direct zone of a tornado that specifically was about our area.  It did move on. We did take to the basement. The storm siren gave us an old clear about thirty minutes later. Radar is so great as they do see everything clearly. The weather doplar in our area is across the lake on the opposite side of our area. 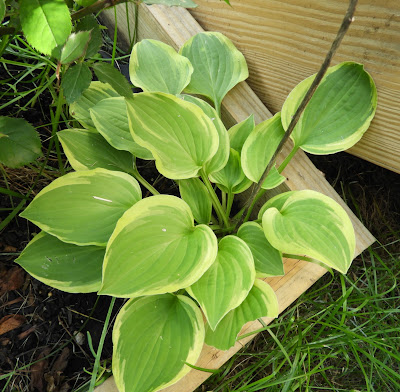 I made a box for a rose last year and in each corner I placed hosta.  They do like that store bought dirt. 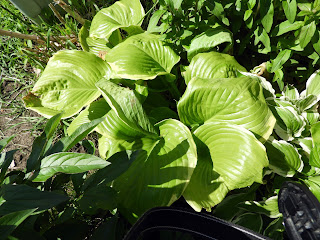 This hosta was hard hit by the frost but it has had all the dead parts of leaves removed now and looks better every day.

I worked on the pavers again today, this morning.  I finalized the placement of eight more squares.  The design is not perfect for me but it  may have to be what it is. The two supporting posts that I laid the squares around are also not evenly places east and west. They were put in at the last and I assume the guys who drilled the metal part of the posts didn't get their machine in line.  The posts still support the deck above but he apparently had to adjust the placement to match the metal posts. Well enough on that stuff. I am tired from my tow  projects today.  The mowing was really needed to be done.  My mower handled it great so I cut right through it all.

It has been a strange day for Memorial Day.  I noticed that the cemeteries that I pass to go to the other place, were really not decorated much this year. We did have a neighbor across the street that had a big get together. I stayed on my side of the street. Thanks for stopping by this evening.
Posted by L. D. at 5:41 PM

I so love a sky like that top pic...you make me want to get out and dig around in the yard. I bet you were relieved to get that yard finished.

Yes the stormy part of the year is here, we need rain so badly. The ground is powder dry. You sound tired Larry...maybe you can fill in with some concrete mixed with sand inbetween the pavers that are not spaced right...or put some piece of garden decoration there! :) Stay safe Hi To Della:)

Sorry you had to cut grass in the rain. I know working with the pavers is very tiring. Your hosta plants are very nice. We brought one with us from the last yard that is doing well. We are to have rain every day this week.

Glad to read the storm passed by without any damage, Larry, but what an ominous looking sky. The basement was a good retreat. Thst paver work can really wear you out quickly as we recall doing it in VA many years ago.