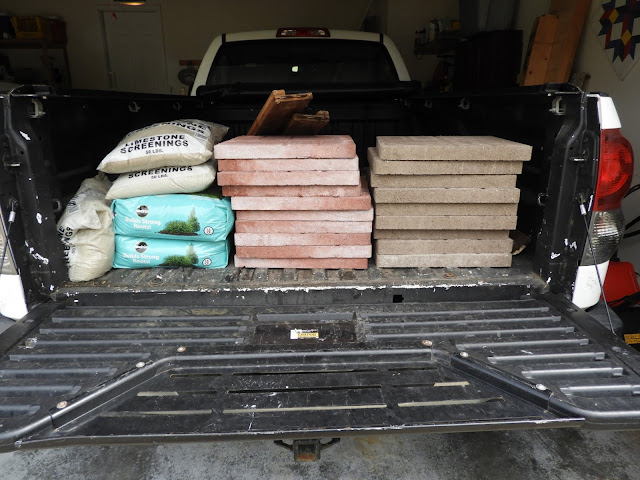 I went to the hardware to get some more gas for my grill.  I thought I would make my visit worth while so I bought patio stuff.  I need to add three rows of five pavers. I also want to put some under the area where the potting bench.   This is heavy work.  I had a young nice high school boy help me load half of the pavers.  Ten of them he carried and put in the truck and I did nine.  He loaded the dirt and I loaded half of the screenings made of limestone.  So far, before lucnch, I took four trips with the wheel barrow down the hill to the back of the house. I hauled down enough pavers to allow me to put in one row.  I only have enough energy to install the one row a day.  I have to lay down dirt and limestone powder before placing them single pavers.  Get them aligned and level on pave at a time takes a lot of work, being that it is work done while on your knees. 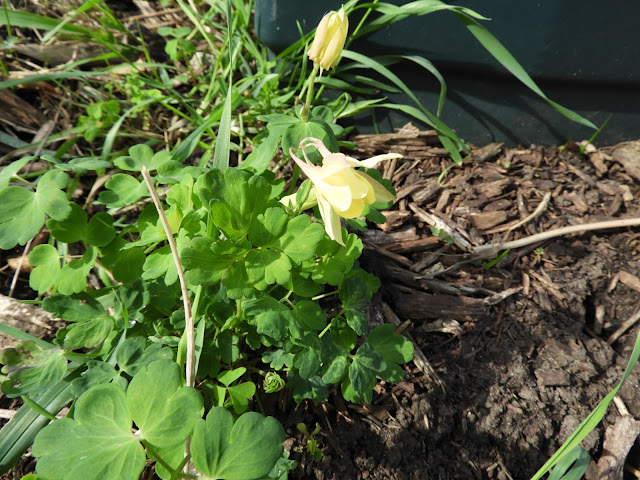 The meadow voles took out the roots of all vegetation in this area except for the yellow columbine. It is nice one thing did survive. 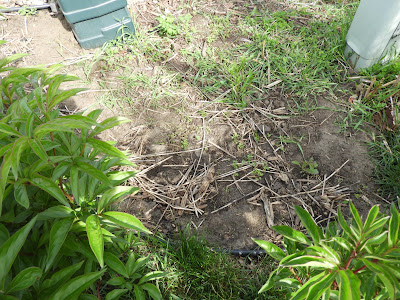 This is the evidence of their destruction in this part.  I think they spent the entire winter there as the ground has now settled down and packed down now that they are gone. As you can see it is a mess. They were dragging down their various holes the dried stems.  I am assuming the poison did work on any voles left behind. Two adult sized one were flooded out by my neighbor who drowned them in a bucket of water. 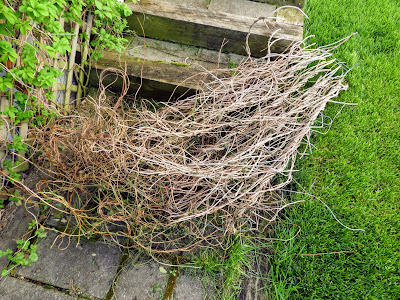 When the sun room  as built this vine was growing next to a stair to the deck. Now that stairs is gone and I decided to cut this out.  There is a metal trellis trapped inside of all that growth. I will wait and maybe later cut all of that off of there.

I will have to squeeze all these project into my life as we have lots o appointments next week. I can chip away at some of it doing things a little bit at a time. I think I need to start working on some garden too. It will all happen as it lines up.  Thanks for stopping by today. 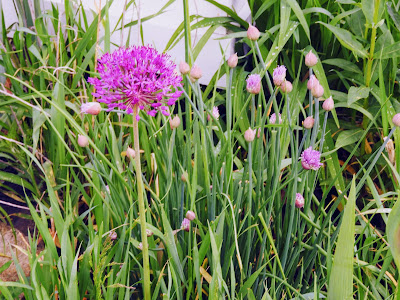 Those pavers are heavy. We've loaded and moved them before. Do be careful. The yellow columbine is very pretty. Our late dachshund used to chase voles for us! I appreciate your visit to my blog. God bless you both as you go for appts. next week.

I get tired just thinking about your jobs.

You bought yourself lots of work! :) Too bad about the vole damage:(