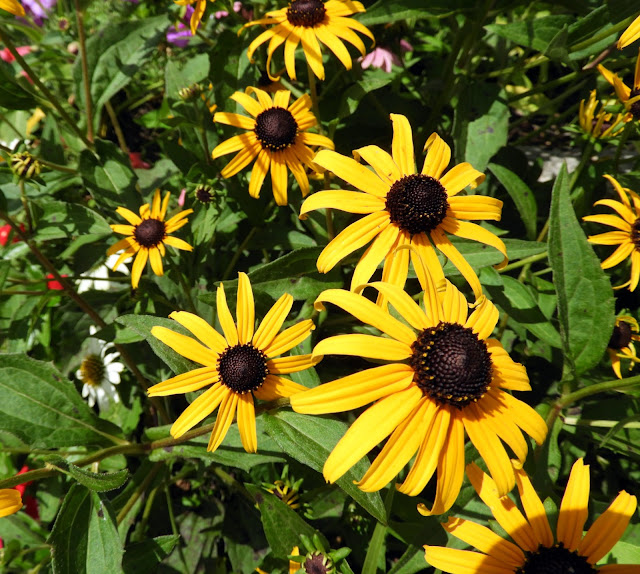 The black-eyed Susans are doing well in the hot sun.  We are cooler today but the sun does still beat down on things. 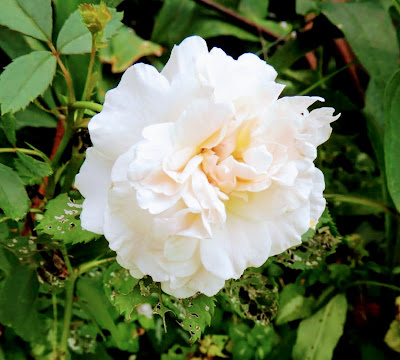 A rose that I purchased last summer is on its second blooming cycle. It is competing with two different coneflowers and the rose may have to be moved to a better location.  I get situations like this when I hurriedly plop things into the ground when they are young plants.

I went to The Home Depot today to look for a trellis.  They did not have it.  I did find some plants that I just had to have even though I don’t need any more.  I found a William Baffin rose.  I had the one at the old place and couldn’t get a start from it.  I had bought that one in Grand Marais, Minnesota.  I did not expect to find that variety here in central Iowa. 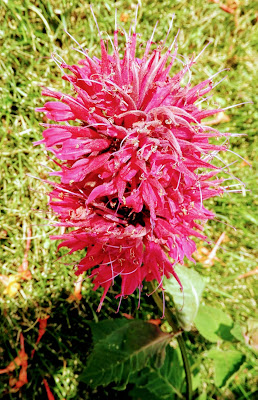 I succeeded in moving the red bee balm to the new place.  I moved roots with two stems and one of the stems bloomed for me. It should be a strong set of stems next spring after it has wintered over. 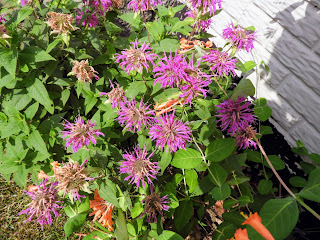 This light purple one was already growing on the new place.  I will have red and purple growing side by side. They seem to be a tough plant as it grows in clay soil on the southern hot side of the house. 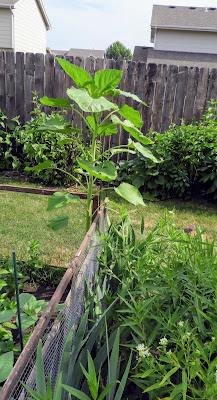 I had to play doctor with one of my sunflowers this morning. The stem had bent and mildly broke in the wind.  I put a steel stake next to it and wrapped the wound with plastic and string to help heal it.  The ties to the post helped a lot to keep it back up right.  After having it so long,  I really don’t want to loose it over an accidental bend. Time will tell if I saved it but the leaves haven’t started to wilt. 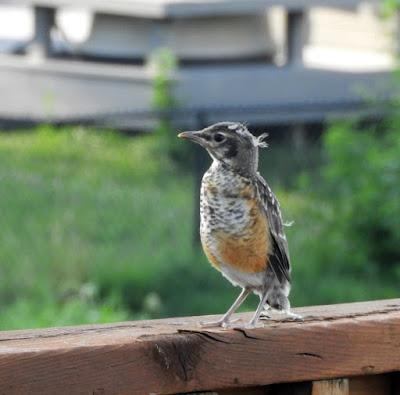 They just leave the nest and they don’t know what they are suppose to do.  I saw a robin trying to feed a couple of these guys down on the ground near the flower garden.  The last robin in the nest left on Sunday afternoon.  I assume the instincts kick in eventually and they don’t depend on their parents anymore.  I just talked with my one neighbor to the south and he says he takes down robins nests.  I guess I thought I was suppose to let them grow and become.

I purchased moss rose today along with a sedum.  The sedum  looks like it is the variety that doesn’t spread and fall down. I needed a couple more pink hard geraniums to fill in on my curve along the sidewalk.

I also bought a begonia today.  My grandmother on my dad’s side really like growing things in her bay window.  My dad’s sister, Aunt Eva, was the only one of ten kids that continued the flower and cactus garden thing. My Aunt Eva lived in the sticks down in southern Iowa and next to her entrance door of the house she had dozens of begonias growing like weeds.  I bought a good sized one as the prices have dropped and I may just winter that over in the basement window. They have great foliage and the flowers seem tropical.  Photos will be posted, of course, in a few days.

Thanks for stopping by today.  I hope everyone is doing good and feeling well.

Your flowers are doing remarkably well considering the amount of heat we've had already this summer.
What a sweet little Robin !
~Jo

What is wrong with your neighbor not liking Robins...what a jerk. I would be thrilled with a nest!

I see you are buying more work for yourself:):)