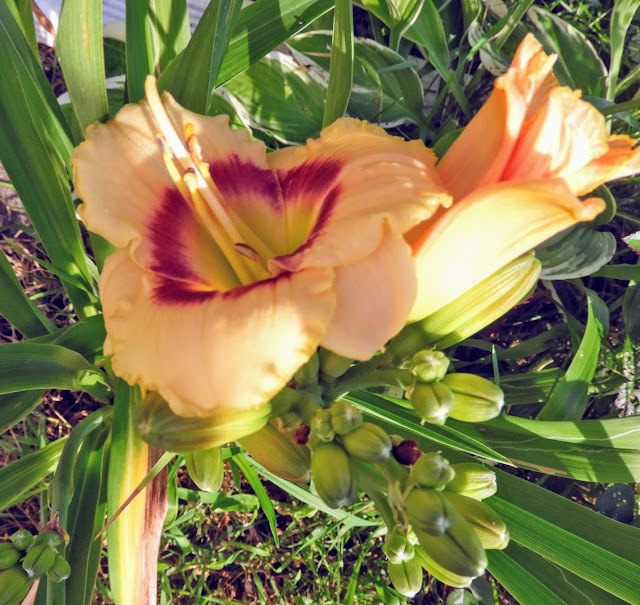 The promise of more blooms is shown by how many buds that will be in line to bloom one day at a time. I have the other twin of this daylily shown below. 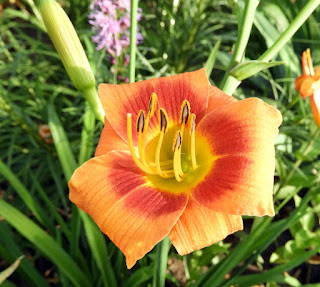 The more orange lily with the darker red target shape did photograph well today. It is interesting how the breeders can get some similar results with different colors. 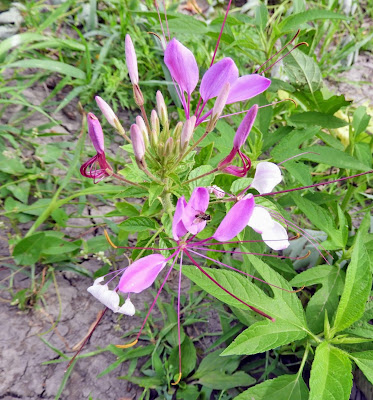 While out at the tree dump site yesterday,  I caught a photo of one of these wild phlox.  I have seen photos of them but it was my first real live view.  There were wild morning glories everywhere growing among the hemp plants but I couldn’t get a good focus of them because they were pure white.  I was in a hurry also to get back to the house to get another load of branches. 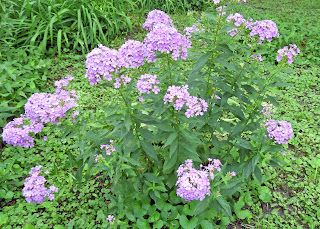 I brought back a phlox bouquet from the old place yesterday. I did decide to bring some of this to the new place after it is finished blooming. I won’t bring any of that creeping Charlie with me.  I inspect all of the soil and roots of anything I move so that I won’t get any of that weed.  I did hear from my neighbor that his daughter down the street had Charlie and he asked what chemical to I use for it. 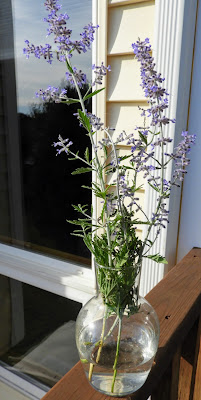 A correction that I need to make about the identity of this plant.  I did call it something else but while at the nursery a couple of days ago that it is Russian sage.  They former owner has it planted in a strange way along the peony bushes.  I am going to move it so it looks like a bush and not a gangly plant.

The nursery  at Home Depot have dropped some of their prices as they hot summer sets in and makes it hard to add plants to the garden. I mentioned earlier that I bought a climbing rose which will plant and grow easily durning this weather. 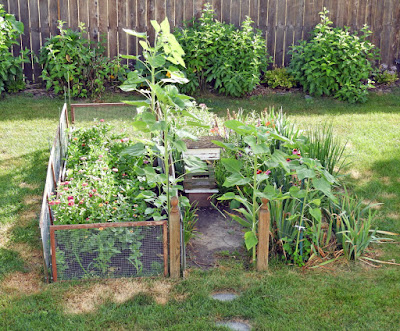 Looking down to the flower garden shows things are growing well. I have a few spaces yet that I can fill in but will wait and see how the existing plants fill in more. The small structure is there on a trial run to see if i like it there.  I have another one at the farm that is taller and I may bring it down to put there.  Either one that I use will have to have a coat of paint. 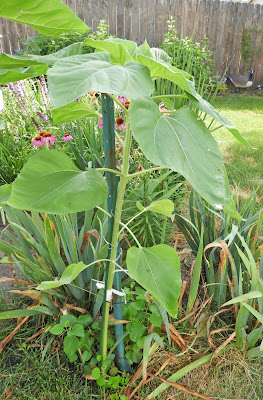 The wounded sunflower has been giving a lot of attention.  It doesn’t wilt so maybe my mending procedures will save it. The plant grows so fast that maybe it will just heal over and shoot up stronger than ever. For someone who thought about not growing, being me, I have seven of them in the garden again this year.  They are fun to watch grow.

This is a resting day for me as I did a lot of sawing of sucker trees off of the property and ended up with two truck loads to dump.  I still have things to do around the house but not with such intensity on the muscles. Thanks for stopping by today.

Good Wednesday morning
Thanks for the walk through the year.
Lovely!

I think that one plant is a Cleome, they are so pretty! Everything is looking good! :)

The plant you called wild phlox is also Cleome or spider flower or grandpa's whiskers! lol I have a million seeds if you would like me to mail them - just email me. Mildred