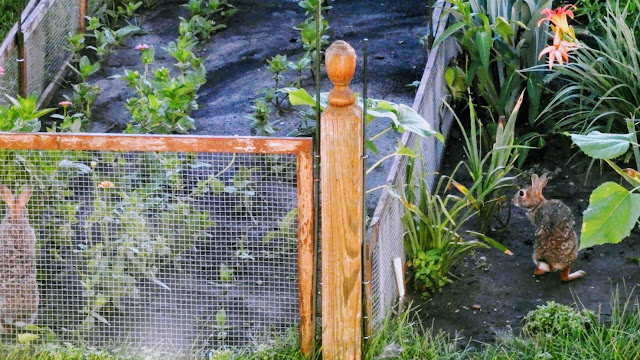 How many rabbits can you see in this photo?  I took the shot and did’t realize that the one on the left was inside of the fence. I watched the one rabbit pull of a lower leaf of the sunflower and eat it instantly.  I wouldn’t think they would be so good to eat.  The rabbit stood on his hind legs and picked it off easily. I will check and see what the other rabbit was eating.  I know they ate early sprouts when the zinnias were coming up but I don’t think they would like a zinnia leaf to eat. 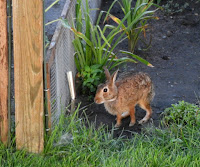 I do have a taller piece of fence that I can put next to the shorter pieces.  I watched the one rabbit jump right over the short section, stay there for a short period of time and then jump back out again.
Since I didn’t get this blog finished, I can now say that I have placed the higher screens to keep them out of the zinnia patch. Mr. McGregor would have them for stew by now but I don’t eat rabbits.

The two were out eating and I hope they stay out of my neighbor’s yard.  I have seen the little baby bunny again yesterday.  He is really young and does now hops instead of scampering. I am surprised that I am only seeing one small one.  Maybe I am seeing a batch of them only it is one at a time. 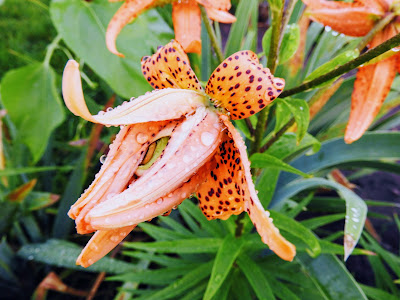 I must have bought this new last fall and put it into the cottage garden. At this point I do not like it.  I don’t understand why that center point of the flower does not open. There are three main stems with many flower buds on them. 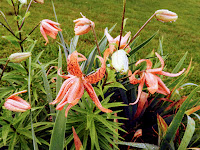 It should look like a better specimen than this.  The buds on the plant were good looking as they were all developed.  I hope that there will be one more stage in this blooming process.

The plant definitely had enough water with 7 to 10 inches of rain. My neighbor to the northish direction ,was telling me that her daughter who is three houses over, has an electronic rain gage.  She did get the measure of nine plus inches of rain from Saturday night. I also learned from her that the swath at the back of my property does have large drain pipe under it , with drain grates about every three houses.  That explains why I haven’t seen a creek running down the hill in the back yard. 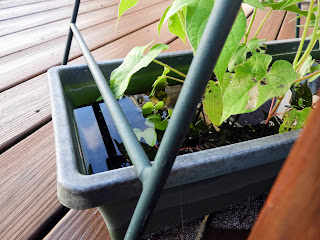 This is the point in the blog where I should insert all of the flooding of Ankeny and Des Moines photos.  The area does not have flash flooding anymore. The problem now is that all low lying areas have so much water seeping into the rivers and stream. The hospice that we visited last year at this time is completely surrounded by water. They had to evacuate the building in the middle of night while the water was creeping in.  Buildings near there were evacuated by sing boats. Yesterday, we saw cars still along the roads and in yards that had been overcome with flood waters, where people had to get out of their cars and leave them. That was less than a block away from our church. 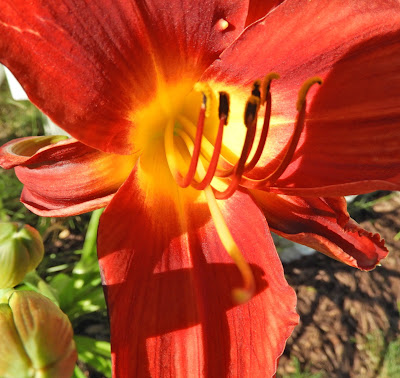 It is getting close to the full day lily blooming season.  I have buds everywhere and this early one keeps giving so good shots. The rainstorm really did damage the bloom and I had to crop off the bad things.

The petunias took a beating from the rain but in a couple of days they will be back into order. The plan for the rest of the summer is just to maintain it all.

We are planning for company now from visitors who live in Chicago. The two grandsons will have grown a lot since we last saw them.

Closing the blog down for today, hoping all are well.  It is getting to be hot out there. 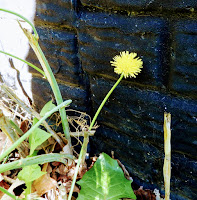 Bunny's just love that you moved there.
Our squirrel came by for a few nuts this morning
had not seen him for some weeks.He took the nut
for the first time from Bennie's hand.
Sad about all that flooding.
Have fun with the grand kids.

We have three bunnies now...maybe more they multiply fast...but we have a fox too. That sure is an odd Tiger Lily:( Stay cool have fun with your Grands!

I bet you have this Lily
https://www.easytogrowbulbs.com/products/tiger-lily-tigrinum-splendens?variant=31581123788

I did see the two bunnies in the first photo, Larry. Hope they are not going to decimate your flowers totally. We never had rabbits eat more than grass when we lived in VA. It's hot here in NH too...stay cool!