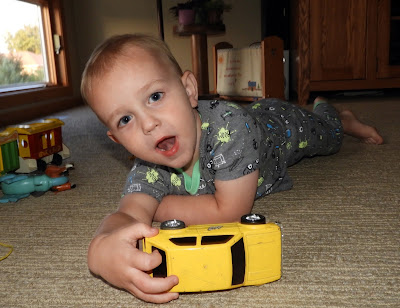 Teddy loves cars.  He can spend a lot of time moving them around and making sounds to go with the movement. 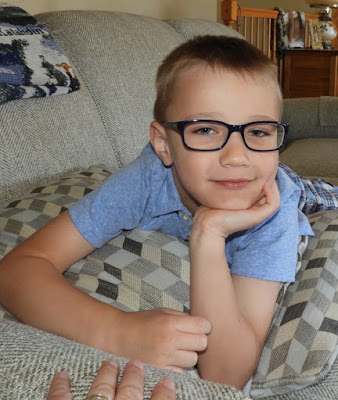 AJ looks older with his glasses.  He has a lazy eye that causes the guy  to  block his view in one of his eyes each day.  The time can be an hour long, but if he gets to use the tablet he may even sit longer with it covered. AJ starts kindergarten this fall. 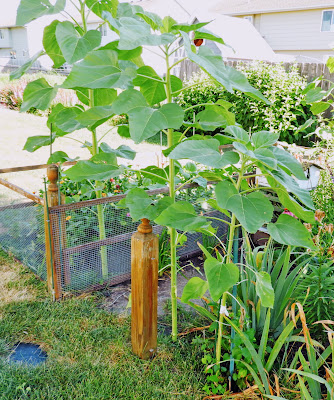 These sunflowers have various heights.  They will all be the same height eventually and probably bloom at different times. The one plant on the right has adjusted to its band aid where he had bent over and broken the stem. I am not certain that it will keep and stay growing but it is worth the try. If it stops woking the leaves will wilt instantly. Right now it has numerous wires holding it to two different stakes to keep it vertical. 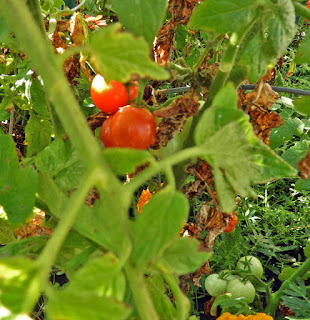 The tomatoes are slow to ripen but I do think that will pick up in the future.  I am still watering them daily as we have large cracks  in the ground.  I don[t want any of my leaves to wither. 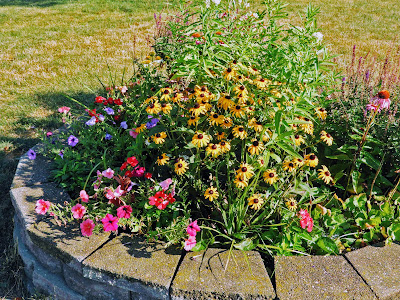 The front planter on main street seems to look good.  I think my last years’ planter was little more showy as I had cannas in there to give the area some more height.

We did hit the bookstore today and it was nice to get out.  We had a bout of salmonella poisoning a couple of weekends ago and my wife is now a lot better.  The store finally told the whole state that they had pulled the spring salad from their shelves.  The celery was bad.  I don’t eat celery because of my allergy to it so it left me free to help out my wife. The discovery seemed to be from a batch that was made by a company back in June 22nd. The public was not informed until July 9th.  She is all good now but it was not a good experience. Getting the refund from the product doesn’t quite seem to be the balance to seven to eight days of continue pain and nausea.

There is not flooding or tornadoes in our near future now.  It seems quite on the central Iowa front.  My neighbor did say the he saw the funnel cloud on the east end of town before it took off to terrorize the 5 towns with lots of damage.  Thank you for stopping by today.
Posted by L. D. at 12:20 PM

Seems like there is lots of food poisoning going on these days. I am so glad Della is better. Your front garden is very pretty! Those boys are so cute! :)