I know he is eating seed, but it projects the feeling of dislike for the snow. During the present snowfall the juncos are having fun darting in and out to get seed.

The roof of of the feeder has drifts again and the bird is trying to decid which feeder that it should fly to for seed. 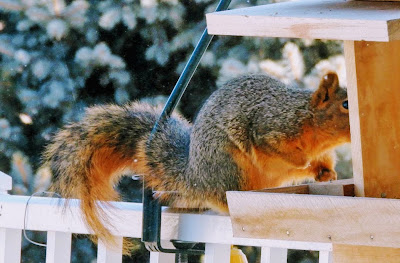 A bad photo with the face covered by the feeder's board. The two squirrels seem to be really hungry as they both are challenging each other for access. 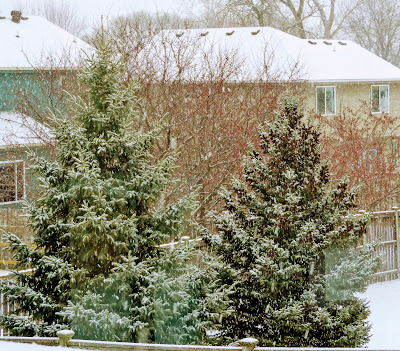 The neighbors tree are being dusted with snow and the backgrounds look red barked in this photo. They will have lots of spring blooms in three months. 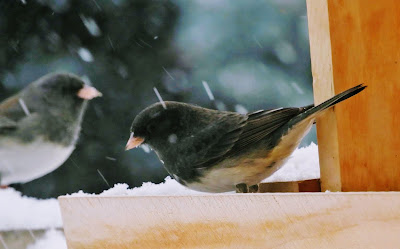 February can be our worst month for winter weather.  It was nice to have a break from it. This new light stuff is just a gentile reminder that it is not over yet.  I will have two sidewalks to clear again.

I received a photo of a cemetery marker from my older brother yesterday. The marker was for my ex sister-in-laws' grave. The grave there in Mesa, Arizona is one of my brother's cremains, his ex-wife's cremains, and their two year old boy who died from cancer back in 1976. My brother Dwight died back in 2008.  The whole thing is such a sad story as their child they wanted so badly died and within a few years later their marriage was gone. Both of them lived difficult lives the next four plus decades.  Ellen was still my sister-in-law and she followed the boys' lives through face book. She was married to a wonderful guy at the end with them living in New York in the country and spent the winters in their Arizona home.  Ellen loved dogs. She was my age.

We started our week with two days of 72 degrees of sunshine, by Thursday we had tornado sirens filling the night air and flood warnings, by Friday morning our landscape was covered in snow, what crazy weather we are all having in these early February days.
~Jo

I so love these photos of the birds...I am afraid the worst weather is yet to come for us, too.

About your sister-in-law/brother/their child...that is so, so sad. So glad you still claimed her as a sister-in-law.

It always breaks my heart a little when at a cemetery and seeing children's markers.

It does sound like a sad story, the death of a child can really put a strain on a marriage.
I see you are getting our share of the snow...good for you! I did have to shovel this morning we got about an inch of snow:)